I was walking up the stairs one Saturday morning looking for a book to browse at the Purdy Kresge Library at Wayne State University in Detroit and I noticed this in a display case. 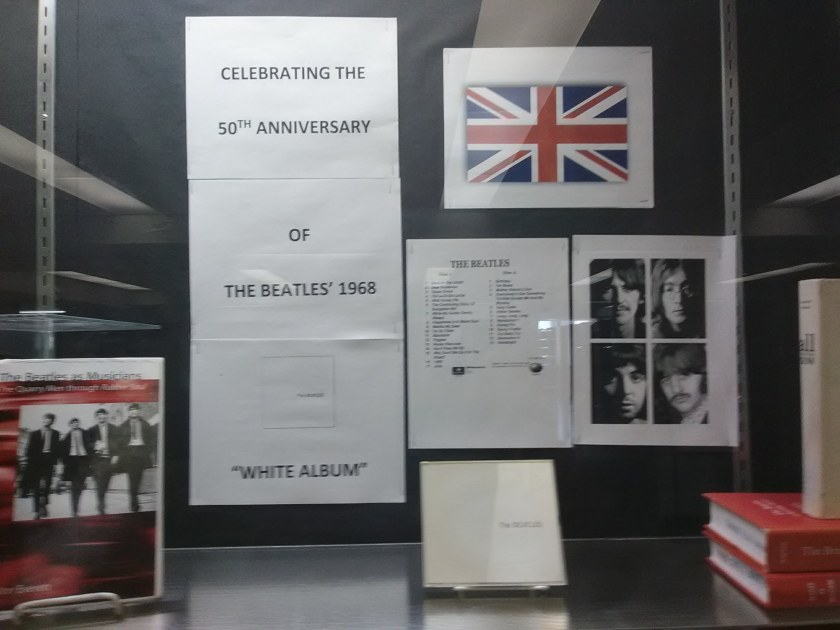 And I couldn’t help but smile.

Not from any nostalgia or special fondness for the Beatles White Album, for which I have very little. All I remember from listening to the album in my youth in the late 70’s and early 80’s was a queasy feeling from the jarringly  disjointed batch of songs which seem to be an “album” only in the sense that they were all collected in one spot.  What happened to the poppy Beatles that I adored?

I appreciated the album more now and understand the sonic coherence that binds the album together.

But this display case struck me as the perfect appreciation for the album. A few books, a photo of the band members, each in their own little window on the page, barely a band anymore, yet still existing as something called “The Beatles” counterbalanced with a photo of the the four members still seemingly in their prime Beatlish glory.  The title cards, an assemblage of words word processed and presented not quite evenly in the window, likely hastily assembled, which mimic the impressions the songs might initially leave upon a listener (is this song finished yet?) yet which belie the true artistry the band and producers imbued in their craft even at this period in their history.

And then the CD jewel case. Small, unassuming, yet in the foreground of the display, a reminder that yes the band at its best really was about the music. But what is a CD jewel case-but itself an artifact from another time- a time of compressed sound, tiny words on a booklet that lacked any of the grandeur and heft of vinyl and its impressive graphics.  A time of repacking and re-marketing.

Yet, how fitting it all was, to be located in an upper floor of a graduate research library in Detroit, hidden behind glass, celebrating an anniversary of a band, long since broken up, whose cultural impact still continues, but maybe only for those of us old enough to choose to remember, and smile, how “the life goes on.”

What if all students conducted research before graduating from high school?

How can we create a culture of learning?

How can we improve the world by asking good questions?

How can educators and parents inspire our students to learn, think, ask questions, understand deeply, and create?

What are you learning today?